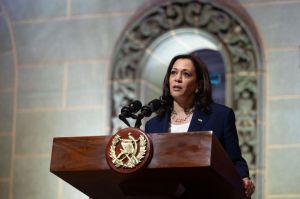 Kamala Harris is facing heat from conservatives again for the second time in a month regarding a speech she made, warning potential migrants to refrain from crossing the border.

Compacted with the criticism regarding her comments, others are going at her claiming that she deprioritized visiting border agents.

On Monday Harris, who was appointed lead by President Joe Biden to oversee the influx of migrants from Mexico, El Salvador, Guatemala, and Honduras delivered a speech that stirred up particular sentiment among conservatives, and those who feel the United States has done little to put forth a comprehensive answer to immigration reform.

“I want to be clear to folks in this region who are thinking about making that dangerous trek to the United States-Mexico border: Do not come. Do not come,” she said.

“The United States will continue to enforce our laws and secure our border. There are legal methods by which migration can and should occur. But we as one of our priorities will discourage illegal migration.”

Harris also was hit with criticism from those irate over the United States’ history of mistreating migrants attempting to flee violence and persecution in their home countries.

On Sunday President Giammante gave a scathing rebuke of America’s migration policy by stating the following:

“We asked the United States government to send more of a clear message to prevent more people from leaving,” Giammattei said during an interview with CBS News.

The White House released a series of resolutions that Harris and Giammante came to during their meeting. The four-pronged approach establishes an anti-corruption task force, a human trafficking task force, a young woman’s empowerment initiative, and economic aid in the form of $7.5 million over three years.

Aside from the Twitter lashings, Harris was greeted by a group of pro-Trump, anti-U.S.  demonstrators who blame the United States administration for the upheaval in Guatemala.

“Kamala, Trump won,” read one sign from one of the demonstrators.

Harris is scheduled to visit Mexico after her meeting with Guatemalan President Alejandro Giammatte is complete.