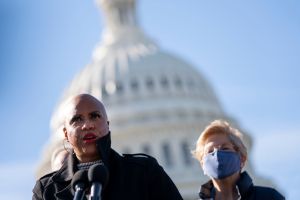 Joined by leading Black economists and advocates, Rep. Ayanna Pressley announced her plan to introduce a resolution calling for a federal job guarantee. As the nation continues to struggle with economic recovery, Pressley says it’s time to finish the work of Black women civil rights leaders and economists.

“We’re clearly dealing with issues now that will call for the fundamental restructuring of American society. It is going to cost the nation something,” Pressley said during a press conference Thursday. “As we find ourselves, dealing with the gravity and the weight of these three completed crises, and we’re looking for how to have a just and equitable economic recovery, but also to chart a different path forward.”

As proposed, the resolution calls for federally funded jobs program which would be  implemented locally. The focus of the resolution addresses community infrastructure needs including child, elder care, environmental protection, and otherwise strengthening neighborhoods.

Pressley believes a federal job guarantee is a part of addressing the persisting income and wealth gap for Black, Latinx, and Indigenous workers, which provides community members the opportunity to work with dignity. The issue is highly critical as the pandemic wages on, subjecting Black women and women of color to an economic recession compounded by systemic racism.

A #JobGuarantee is a crucial strategy to advance racial equity and economic security for all. And 93% of Americans support it, making it one of the most popular economic policies. Tell your Rep to support @RepPressley’s resolution today https://t.co/qRYb973lYq pic.twitter.com/VyDIJbTp0l

“And so I think given the scale and scope of the three conflated crises that have bearing down and expressed commitments to address everything from climate change to economic hardship to systemic and structural racism, a federal job guarantee allows us to accomplish all of those things,” Pressley continued.

“[Saide Alexander] believed that we needed to invest in jobs to address issues tied to housing, people who are living in slums, literacy and also providing access to utilities for everybody within the country,” said Banks. “This [proposal] is absolutely an expansion of work opportunities.”

Pressley’s resolution would bring the U.S. closer to fulfilling the full employment mandate of the Federal Reserve.

“During this time, when so many jobs have been lost that community needs have been great,” said Angela Glover Blackwell, founder in residence at PolicyLink. “The very idea that the federal job guarantee would be a way for communities to be able to have people do the work of rebuilding community of investing in infrastructure the human infrastructure for the care economy as well as the infrastructure and transportation and other things that are so vital.”