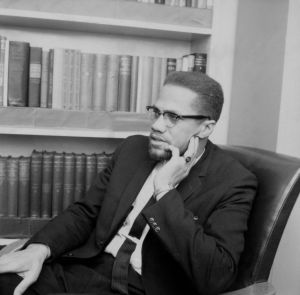 “Ray Wood, an undercover police officer at the time, confessed in a deathbed declaration letter that the NYPD and the FBI conspired to undermine the legitimacy of the civil rights movement and its leaders,” reads a statement sent to NewsOne.

MEDIA ALERT: @AttorneyCrump & Reggie Wood to hold news conference on 2/20 at 12:30 ET to deliver new evidence regarding the assassination of Malcolm X to his daughters & the Manhattan DA following a deathbed declaration from Ray Wood, an undercover police officer at the time. pic.twitter.com/xadqNs5mlR

“Without any training, Wood’s job was to infiltrate civil rights organizations and encourage leaders and members to commit felonious acts. He was also tasked with ensuring that Malcolm X’s security detail was arrested days prior to the assassination, guaranteeing Malcolm X didn’t have door security while at the Audubon Ballroom, where he was killed on Feb. 21, 1965.”

Wood’s letter will be read aloud by Reggie Wood, a relative and administrator of his estate, and handed to three of Malcolm X’s children, Qubiliah Shabazz, Ilyasah Shabazz and Gamilah Shabazz, who will be in attendance. According to the statement the findings will also be shared with the Manhattan District Attorney.

Malcolm X was gunned down in front of an audience at the Audubon Ballroom in Harlem on February 21, 1965. He was 39-years-old. While arrests were made in his murder case, questions and conspiracies remained regarding his loss of life.

The recent accusations echo theories raised in the 2020 Netflix documentary, “Who Killed Malcolm X?” The series followed Abdur-Rahman Muhammad, an activist and self-trained investigator who dedicated his life work to solving the civil rights icon’s murder. In the documentary Muhammad interviews several important figures involved in the investigation, explores different conspiracy theories including possible federal and state law enforcement involvement. Muhammad also attempts to explore an accusation that Malcolm X’s alleged killer was a Newark community leader who worshipped at a local Mosque.

After the documentary aired, the Manhattan District Attorney’s office announced it review the case, with the possibility to reopen if leads proved sufficient.

Three men were jailed for the 1965 murder of the activist. Talmadge Hayer – later known as Mujahid Abdul Halim – admitted he took part in the murder, while two other men, Norman 3X Butler (who later changed his name to Muhammad Abdul Aziz) and Thomas 15X Johnson (who took the name Khalil Islam), maintained their innocence. Aziz was released on parole in 1985; Islam was released in 1987 but died in 2009; Halim was released in 2010