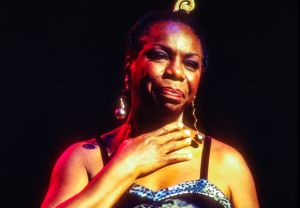 Nina Simone was born on February 21, 1933, in Tryon, North Carolina. She would have turned 88 today.

Simone is one of American music’s most-celebrated figures as well as a legendary icon of artistic expression and empowerment. Known as the “High Priestess Of Soul,” a nickname she was reluctant to claim reportedly, Simone’s path in becoming a vocalist and songwriter nearly didn’t occur as she initially aimed her focus in another area.

Born Eunice Kathleen Waymon on February 21, 1933, in the North Carolina town of Tyron, a young Simone came to music as a child prodigy gifted in playing the piano. Her mother, a Methodist minister, allowed her to play for the local church. Luckily, Simone was able to play the instrument by ear, because her parents were too poor to provide her with lessons. Simone’s fortunes changed, though, when she began to study under an Englishwoman and gained an appreciation for classical pianists.

After a schoolteacher raised funds for Simone to finish school, she won a scholarship to the famed Julliard School of Music. Money became scarce, however, and Simone left the school and headed to Philadelphia to enter a more affordable program. She was rejected by the Curtis Institute of Music in Philadelphia, and she later claimed that the school blocked her from attending because of racism.

The stage name “Nina Simone” emerged from this period of her life: Nina was a nickname for “little one” and Simone was the first name of actress Simone Signoret. Simone began playing jazz and blues clubs in the 1950s as a pianist then eventually began singing with her songs, becoming a darling of Harlem figures, such as James Baldwin and Lorraine Hansberry among others.

Simone recorded her first full album in 1958, which featured “Plain Gold Ring” and “Little Girl Blue.” Simone’s only top-40 pop hit “I Loves You Porgy” from the George Gershwin musical “Porgy and Bess” also appeared on the record.

Simone became entrenched in the Civil Rights Movement by the mid-1960s. Her song, “Mississippi Goddam” was written in response to the murder of Medgar Evers and the Birmingham church bombing that killed four young Black girls. When Rev. Martin Luther King Jr. was assassinated, she wrote “Why (The King Of Love Is Dead).” Another popular record at the time for Simone was the tune “Young, Gifted and Black,” which was a title of a Hansberry play.

Simone left America, frustrated with the music scene and racial tensions. She made stops in Liberia, Switzerland, and Barbados among other places before settling in France. In the 1970s, she faded away from the limelight. Her career received a jump start in the 1980s, after a United Kingdom ad used one of her songs in its spot. She went on to write her 1992 autobiography “I Put A Spell On You” and released her last solo recording, “A Single Woman” in 1993.

After enjoying touring success and a robust resurgence of sales from her catalog, Simone settled down in France once again and was allegedly battling health issues in her final years. She passed away at the age of 70 in her home in Carry-le-Rouet.

Simone’s stirring vocals have yet to be imitated, and her potency as a songwriter stands strong to this day. Although her songs were a soundtrack for a movement, she possessed depth that far exceeded the labels critics and fans tried to put on her. In short, Nina Simone was far more complex and talented than anyone could put into mere words.