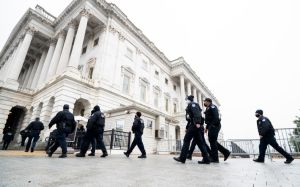 The U.S. Capitol Police recently suspended six officers with pay in the weeks following the January 6 insurrection on Capitol Hill. The department is investigating a total of 35 police officers regarding their actions, or inactions, from that day.

A total of five people were killed during the attack. Brian Sicknick, a veteran Capitol Police officer was bludgeoned to death by members of the riot mob.

Capitol Police officials remain under scrutiny regarding the lack of preparation on Jan. 6 as groups like the Proud Boys and other hate organizations made public declarations regarding their intentions of traveling to Washington D.C. in order to stop the Electoral College count. The news comes as law enforcement officials around the country continue to investigate officers with allegiances to white supremacists and hate groups.

Acting Capitol Police Chief, Yogananda Pittman, a Black woman who was appointed after former Chief Steven Sund resigned on Jan. 7, said she would take disciplinary measures against any officer who was found to be negligent or a participant on Jan. 6.

Two officers were suspended prior, one after he was captured taking selfies with rioters, and a second who was caught on camera wearing a “Make America Great Again.” The video went viral, prompting outrage. However the officer claims in an interview with The Wall Street Journal that he wore the hat to gain trust with the protesters so he could help other officers to safety.

One silver lining regarding the unprecedented incident was the praise given toward Capitol officer Eugene Goodman, who was recently awarded the Congressional Gold Medal. During the most recent impeachment proceedings House impeachment manager Rep. Stacey Plaskett revealed that Goodman was able to escort Sen. Mitt Romney to safety, a tidbit of information that was not known to the public.

In the weeks following the attack, more than 250 people were charged for storming the Capitol, following the command of an inept “leader” who could not deal with his loss.

However, while hundreds have been arrested and charged, large numbers of the rioters were were released on bail, placed on electronic monitoring, and supported in their frivolous demands for preferential treatment while behind bars.

This isn’t what I expected my first bill to be.

But we must investigate how a fascist mob was able to overtake our Capitol and if there are any ties between Capitol Police and white nationalists.

We need to pass the COUP Act now. pic.twitter.com/ztpLkd2nH6